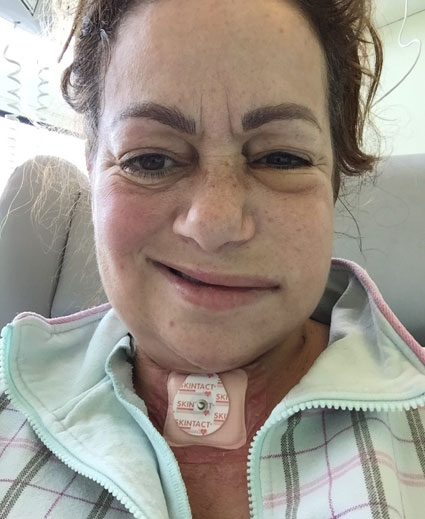 It started with a simple ulcer in January 2017. It was on the roof of my mouth top left, so naturally I went to the chemist and bought bonjela and such like, and took advice from my crochet pupils e.g. put an aspirin on it, it works for my son etc. but it wasn't going away.

On 15th February, I phoned my GP. I thought that all I would need was a simple course of antibiotics, but she sounded concerned. She wanted to see me and 15 minutes later the 'C' word was mentioned - "Just to be sure", she said calmly. I was going to be fast tracked to the Maxillofacial or Max Fax Department at Dorset County Hospital in Dorchester.

When I got home, I had to tell my soulmate and husband. When I mentioned Cancer having to be ruled out, I had a lump in my throat and I had to turn away as tears welled. He was very supportive and matter of fact as there and then the phone rang.

"When I got home, I had to tell my soulmate and husband. When I mentioned Cancer having to be ruled out, I had a lump in my throat and I had to turn away as tears welled"
It was Max Fax. They had an appointment cancellation the next day that I could have. Oh! my word - this was fate. So, I went on the 16th and was referred by Professor Ilankovan to have a biopsy "just to be sure". Yep, those words again.

On 1st March, I had my biopsy, which was very painful once the local anesthetic had worn off, and on 17th March, I went for the results.

Yes, it was Cancer of the oral cavity and a big operation was planned. Ian and I both had a little "wobble" whilst waiting for the Head and Neck Nurse to talk to us, but we smiled and my positive mental attitude kicked in from that point forward.

Due to the fact the op would be 12 hours, it took a while to arrange, but the NHS did well, getting me prepared mentally and practically e.g. getting a peg (feeding tube fitted) and in I went on the 27th April. After four days in a medically induced coma, I decided that I had best get up and get on with life, so I did.

My op involved taking skin and bone from my left shoulder and after cutting the cancer out of the top left of my mouth, reconstructing my mouth and jaw. I was nil by mouth for 12 weeks and lost over three stone. Finally, I had the bikini body I had always wanted!! LOL.

I was supposed to stay for 30 days in hospital, but despite the amazing view of Brownsea Island, I managed to escape in 10, much to the disgust of my surgeons, all four of them, but I assured them that seeing and being with my dogs, my ducks, chickens, bunnies and cows would be better for me!

I had promised to go and see my surgeons every week, and it was then that I was told that the cancer had "kissed" my bone, so I would need sixweeks (every day) of RADICAL Radiotherapy. I had to have a head mask made and being claustrophobic, that was a lot worse for me than the op itself!

About a week later I had a cheque in my hands for £360 - enough to pay for my petrol there and back for the six weeks, however something else wonderful happened. A lot of my friends volunteered to drive me for my "zapping" sessions, and even though I explained that I could give them the £10 I got from the DCCF, they didn't want it, so I set up a "Just Giving" page and gave the money back to the DCCF. Word got round, and soon I had raised £1,300 for them!!

Once my radiotherapy sessions had finished, although I still had my Positive Mental Attitude with me, the zapping had taken its toll. I had a long recovery ahead of me and when I went to see the oncologist six weeks later, he was happy that the zapping had done what it was meant to do, but the side effects were not great, and what I thought in the summer was my recovery going well, I had taken a huge step backwards.

Smiling on, I had more visits to the Dentist at the hospital, as well as the surgeons, physio, speech therapists and dieticians!

I had a "hole" develop in the skin flap in the roof of my mouth - one of the side effects - the radio waves had shrunk my flap!! They made me a splint to wear. I hated it. My mouth got so sore that after two weeks I was nearly in tears. Fortunately, I had another visit due at the hospital and my splint was shaved and re-moulded to make it more comfortable. However, I have decided that my toothless smile is the new ME for now, so I've changed my mind and I hardly wear it at all now.

I also saw the surgeons, two of them, on the same visit. They were confident that they had got rid of my cancer that I call HANC (Head and Neck Cancer). Hooray - Hanc had packed his bags and gone!

I am still very much under Hospital care, seeing my consultants monthly and the dentist and hygienist too. My next op is a bone graft from my hip to my upper left jaw. Once that is settled, I can have teeth implants fitted, and then a face-lift to repair the damage done.

I currently suffer from PTSD and I am receiving counselling. I run a Facebook page called Head and Neck Cancer Support Group UK for UK based patients. It currently has almost 300 members.