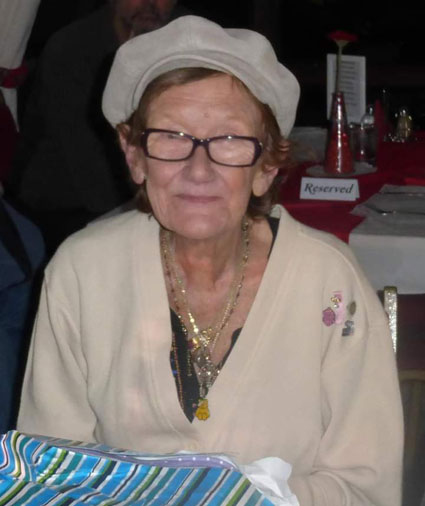 It is almost unbelievable to think that my mumâs broken toe would ultimately save her life!

In October 2003, my mum broke her toe and went to see our family GP. During the consultation our GP became concerned about the hoarseness in her throat. She had been hoarse for a couple of weeks, but thought it might be the start of a cold, although she did not have any other symptoms. Our GP referred her to an Ear Nose and Throat (ENT) consultant - my mum reluctantly agreed because she didn't think it was worth bothering anyone about.

During the next couple of weeks, she developed a slight sore throat and every now and again when she drank any sort of fluid, it would come down her nose. In November she went for her ENT appointment and her consultant told her that he wanted to do a biopsy. This was scheduled for January 2004. Over Christmas 2003, mum developed a cough and had started to become very tired. It was a very unusual cough - it sounded like she was trying to dislodge something. Mum said that she felt as if something was stuck in her throat.

Mum went into hospital on the 21st April 2004 for a bilateral neck dissection, to remove the nodes from her neck. She had all of her teeth extracted during this operation. We hadn't really been told what to expect or what the surgery entailed so it was quite traumatic when we saw mum after her surgery. She had staples running from behind her ear, down her neck to just above her collarbone. One side of her face was very swollen and bruised and she looked in so much pain. We realised that this was just the start of her treatment but we had no idea how she would cope with what was to follow.

She endured weeks of chemoradiotherapy which is chemotherapy and radiotherapy treatment running along side each other. Mum attended The Beatson in May 2004 to have her mould for her mask fitted and she started a gruelling regime of daily radiotherapy and weekly chemotherapy which would last until 19 July. After her last treatment we were all so relieved and thought that this was now the road to recovery to a normal life. Unfortunately, we were to find out that normal was not going to happen.

The radiotherapy has terrible side effects, but for Head and Neck Cancer, it has devastating side effects. Mum could no longer take any food or drink orally as she could not swallow. Her salivary glands had been damaged and she could no longer produce saliva. She had a constant dry mouth and suffered from many mouth infections in the beginning. Her sense of taste and smell was lost. A nasogastric tube was inserted to give her much needed calories as her weight had reduced so much during the treatment.

Five years later, in 2009, mum received the all clear from her consultant. The following year in 2010, mum held her first great grandchild and in 2012 mum appeared at The City Halls in a play written by the writing/drama group she had joined; and in 2013, celebrated her 70th birthday. None of this would have been possible had it not been for Mr Irvine, her Consultant and an incredible team of Head and Neck Nurse specialists, dieticians and speech therapists; and most importantly, our family GP who recognised mums early symptoms.

Mum had been such a big part of my life, particularly during the 11 years from her diagnosis and I was at a complete loss. The Head and Neck specialist, who had been allocated to mum initially, suggested that I pop along to a support group for Head and Neck cancer patients, families and carers that had recently been set up by a group of former patients. She suggested that I may be able to help other patients and carers. It was here I met an inspirational lady, Cath Clark, who took me under her wing and supported me through my darkest days.

"I hope that sharing her story will help raise awareness of the importance of seeing your GP if you have symptoms for three weeks or more"
I met some amazing people, patients, carers and family members of Head and Neck Cancer sufferers who met to share and seek information; and to help and support each other. Some members of the group were keen on raising awareness and decided to complete a walk. Cath and I wanted to walk with the group, our families and friends; and thought 20 people might turn up. We decided to complete a 6k walk from the Falkirk wheel to the 30-metre high horse-head sculptures known as The Kelpies. Over 100 people joined us on the day. These included families we had never met before, Head and Neck Nurse specialists and a Professor of ENT and a Head and Neck Surgeon. All together there were 120 people walking together, with one thing in common and with one goal, to raise much needed awareness of Head and Neck Cancer in Scotland.

In 2017, following another introduction, some members of the group embarked upon another walk/trek - a 9-day trek of The Great Wall of China.

Head and Neck Cancers are relatively unknown, but if caught early are mostly curable. My mum was a Head and Neck Cancer Survivor and I hope that sharing her story will help raise awareness of the importance of seeing your GP if you have symptoms for three weeks or more.