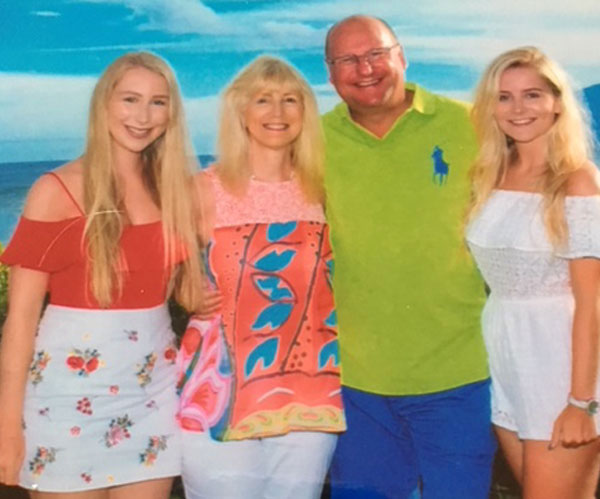 Unfortunately, advice and information were not readily available, so I resorted to the internet. The information I found and the results were so dramatic, it caused me so much concern, that I stopped reading the articles.

I was admitted to St. Johns where I had exploratory surgery. When I came round, I had a very sore throat and recall telling the surgeon of my delight that my tonsils had been removed to rid me of throat cancer. He was puzzled at that statement, but I had read so many stories on the internet of these types of cancer resulting in losing parts of the tongue, cheeks and eyes that I felt relieved that I had got away with relatively little surgery.

The tumour was so small that it was only found by touch, but unfortunately had already infected another node. Events moved very quickly once the source had been located. My husband came with me to meet a team of people at the hospital including my cancer doctor, where the treatment regime was explained to me. I had to have a feeding tube inserted into my stomach (which I named 'Tucker the Tube') because I would not be able to eat properly, my protests that "of course I would be able to eat" were politely ignored. Radiotherapy would take place every day for seven weeks with two rounds of chemotherapy simultaneously.

The insertion of the tube in my stomach was not a pleasant experience and, as I am allergic to morphine, sickness quickly set in. Four days later, I had my first dose of chemotherapy. I had a radiotherapy mask made, which fitted tightly over my head and shoulders and began my seven-week course. I had to stay in hospital on a rehydration drip. Whilst my hair didn't fall out at first, which was a boost to my self-confidence, after the treatment ended, it became very thin and much of it did fall out. My friends had decided that if I needed to wear a wig then they would wear one too, but I managed to retain enough hair not to bother.

"I was lucky that it was found early and I had such wonderful support from my family and friends. The lump was never going to beat me â that was never an option"
The chemotherapy was extremely difficult for me. I was continuously sick for three months. I remained in hospital for 19 days during the second round of chemotherapy and refused to allow my kids to visit. I struggled with the side effects of chemotherapy and radiotherapy. I had so many tubes and looked quite scary. I only allowed my husband, who hates hospitals, close family and a few very close friends, to visit. My stomach did not readily accept the feeding tube which 'popped' on three occasions and had to be reinserted. I would highly recommend the night feed option which fills you with all required nutrients with only the background noise of the machine to contend with.

Once my treatment was complete, one of the tumours had completely disappeared but Norrie remained stubbornly there, even though he was now minute. The option of surgery to remove the lymph nodes was considered but that brings a risk of affecting the voice box. Another option, which I accepted, was an injection of radioactive material which was followed by a full CAT scan. This showed that Norrie was no longer active.

I began three monthly check ups and returned to work, almost full time. I have few problems, I feel the cold more than I used to and, because my salivary glands are not operating as they should, I sip water through the night. Taste is slowly returning, four years later and I feel fine. The one outstanding oddity is chocolate. I love chocolate, but cannot eat it now - much to the amusement of my friends.

I was lucky that it was found early and I had such wonderful support from my family and friends. The lump was never going to beat me â that was never an option.