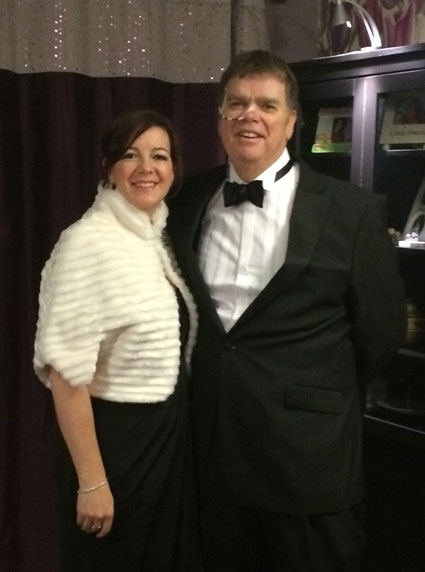 My husband Alan was diagnosed with oropharyngeal cancer (tumour at the base of his tongue) in August 2015.

It had been a fantastic week up until that point as we had welcomed our first granddaughter into the world after 4 grandsons! I am a critical care nurse and I had my suspicions the day we went to the ENT clinic for the results. Alan had turned 51 in June 2015, is 6ft 3 inches tall, never smoked and consumed minimal alcohol. As a result of his generally good health, we were shocked at his diagnosis and the weeks after were a black hole of uncertainty. Later, we found out that Alan's cancer was caused by human papillomavirus 16 (HPV 16); the same type which causes cervical cancer. We were told that because of this there was an 80% success rate with the treatment.

He had CT scans and also had a mould of his face and neck made, to design a mask for his radiotherapy treatment. His tumour was a stage 3 with stage 2 node involvement. Thankfully no metastases. So we started six weeks of radiotherapy treatment which included two overnight stays to have intravenous chemotherapy (one in the first week and one in the fourth week). While I found this exhausting, you can imagine how Alan felt.

He sailed through his chemotherapy like a warrior, but the radiotherapy knocked him out. He did really well until the third week when he developed severe pain on his left shoulder and developed burns on his neck and collarbone. His oral intake was decreasing everyday too and inevitably he was admitted to the cancer hospital in Glasgow for a nasogastric tube (NG tube). The next two months were spent feeding Alan seven times a day down the tube to sustain his weight. He lost 56 pounds in five weeks.

His mouth was horrendously painful due to the treatment and he needed morphine-based medication to keep him comfortable. Most of his days between September and December were spent sleeping between treatments. It was heartbreaking to watch and yet I'm trained and see this often in my work. However, it's very different when it's happening to someone you love.

"Now we are just over two years post treatment and Alan is continuing to recover. He is back at work and getting on with life as a papa to six beautiful grandchildren"
Alan is an electrician, very strong, and very rarely sick despite having Type 2 diabetes. Now here I was, standing in our bedroom feeding him bottles of vanilla milkshake as he slept and seemed to have aged overnight. I was angry with cancer!

I felt my training was a huge advantage to us, but also quite a burden as I knew too much at times. Overall, I would say that Alan's treatment journey was mostly good; a few hiccups with pain referrals and pharmacy but I made sure these were resolved.

Now we are just over two years post treatment and Alan is continuing to recover. He is back at work and getting on with life as a papa to six beautiful grandchildren. Our children were a great support, as were our friends. I probably could have allowed people to help more, but I wanted to do it all and be at every appointment and clinic. The coming years will see Alan have regular checks with the ENT doctors and when we get to ten years post treatment, maybe we can finally relax. We are very fortunate that Alan's cancer was treatable and I pray we continue to be fortunate as well as extremely thankful.